With the release of Samoreau, the Sydney-born/Berlin based violinist and composer Daniel Weltlinger concludes his trilogy of recordings celebrating the musical legacy of the influential Belgian-born French Manouche guitarist/composer Django Reinhardt, the first European instrumentalist to make significant and lasting contributions to the jazz canon. The album follows Weltlinger’s critically acclaimed recording ‘Koblenz’ which received a 5-Star review in Downbeat and was among the recordings hailed as “masterpieces” in its list of the Best Albums of 2015. Samoreau is dedicated to Reinhardt’s international legion of fans and showcases 11 Weltlinger compositions influenced by the enduring Gypsy Swing or ‘Manouche’ musical style Reinhardt pioneered in the 1930s, which continues to inspire musicians and resonate with audiences around the world today. The album is more guitar heavy than the two more orchestral leaning recordings that preceded it, as Weltlinger is joined on the recording by members of the Reinhardt family including the acclaimed guitarist Lulo Reinhardt from Koblenz, Germany, as well as four of Lulo’s nephews who are also all guitarists. Two member’s of Lulo’s Latin-Swing Band in which Weltlinger also performs appear as well. 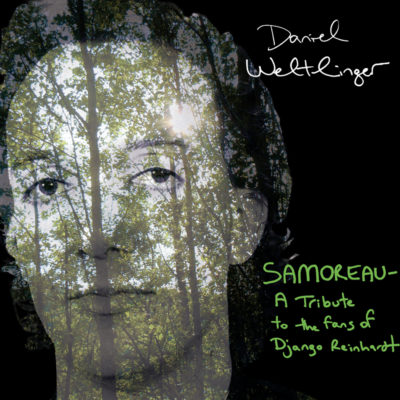 ‘This album is often so swollen with beauty it is like time-lapse photography of tulips blooming. The final instalment of Daniel Weltlinger’s trilogy paying homage to Django Reinhardt, it consists of Weltlinger’s own compositions – from lilting waltzes to surging swing – played with a band including his long-term collaborator Lulo Reinhardt on guitar. Several tracks have no fewer than five acoustic rhythm guitars (played by Lulo and his nephews, underpinned by Harald Becher’s bass) creating the sort of thrust usually associated with jet engines, and if that wasn’t going to get Weltlinger’s violin airborne, nothing would. Not that becoming airborne is a challenge for the violinist, whose plush tone has a built-in soaring quality, whether he plays with scything velocity or leaves notes hanging in the air with such poignancy that time itself seems to stand still. Among the thick undergrowth of guitars, Lulo’s solos always have a particular sparkle that separates him from the plethora of Gypsy swing guitarists beholden to his great-uncle.’