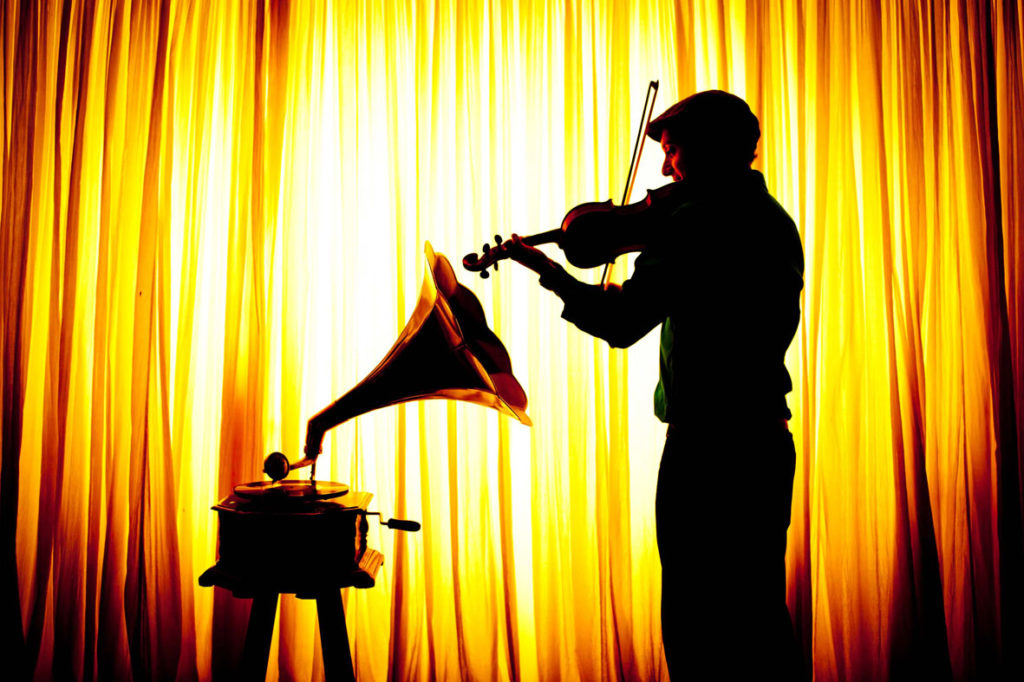 ‘If you can make sound tell a story it becomes music, and were Daniel Weltlinger not a musician, he would still be a story-teller…he uses notes the way a supremely elegant writer – say, Austen or Orwell – uses words, so the sounds, rhythms and sentence constructions dovetail with the meaning so perfectly that the reader’s eye dances effortlessly along each line.’
John Shand – Sydney Morning Herald

‘Violinist Daniel Weltlinger composes and plays new material in the tradition of Django Reinhardt, but with a look to the future.’
George W. Harris – Jazz Weekly

‘The violin sings in the hands of Daniel Weltlinger like no other.‘
Peter Winkler – Music Trust Online

Born in Sydney, Australia in 1977 and of French-Austro-Hungarian-Israeli family background, the critically acclaimed Berlin-based violinist and composer-producer Daniel Weltlinger has long been renowned worldwide for his distinctive warm sound and innovations within the genres of Gypsy-swing, jazz, Yiddish-klezmer and experimental/free-improvised music. He is frequently in demand in a recording or performance capacity, often in collaboration with an array of top musicians and ensembles in a variety of different formats, and is highly sought after for his technical and musical mastery on his main instrument. A graduate of the Sydney Conservatorium of Music, he has performed and recorded in countless major concert halls, theatres, clubs and festivals across Australia, Europe, China, Morocco, Turkey, the US and Israel, and continues to collaborate with a wide range of renowned artists and ensembles including German-Sinti guitarist and composer Lulo Reinhardt along with members of the Reinhardt family based in Koblenz/Rheinland Pfalz, Berlin based Yiddish singer-actor Karsten Troyke and singer-actress Sharon Brauner, Polish-Australian singer Nadya Golski and her 101 Candles Orkestra, the Australian multi-ARIA Award-winning Gyp-rock band Monsieur Camembert and the Berlin based Turkish-Classical Ensemble Olivinn amongst many others. He runs the independent record label Rectify Records, which produced the album ‘Koblenz’ nominated as amongst one of the best albums of 2015 in Downbeat Magazine, and in addition to leading various combinations under his own name co-leads a number of ensembles including Gypsy-jazz collective ‘Radio Django’ with guitarist Janko Lauenberger, Hungarian Folk-experimental duo ‘The Huns‘ with bassist/multi instrumentalist Taylor Savvy, as well as two Australian based contemporary music projects ‘Zohar’s Nigun’ and ‘The Asthmatix’ with long-time associate keyboardist Daniel Pliner, which fuse Jewish music within the respective contemporary frameworks of jazz and electronica/hip-hop.

Weltlinger’s unique sound has been regularly featured on radio and television worldwide and featured on the award winning soundtrack composed by Nikko Weidemann and Mario Kamien for the hit TV show  ‘Babylon Berlin‘ directed by Tom Tykwer, Achim von Borries and Henk Handloegten which premiered in October 2017 on the Sky Television Network. Further film, documentary and theatre soundtrack credentials have included amongst others ‘Love My Way’ (Stephen Rae), ‘The Underpants’ (Alan John), ‘Uncle Chatzkel’ (Guy Gross), ‘Peking To Paris’ (Roger Mason), ‘The Cat That Walked By Himself’ (Peter Winkler) and ‘Meet The Waks Family’ (Neill Duncan). Weltlinger is endorsed by a number of top international companies and benefited in 2010-2017 from the support of BNP Paribas in Australia and the BNP Paribas Foundation in Paris for the development of a trilogy of recordings – ‘Souvenirs’ (2011), ‘Koblenz’ (2014) and ‘Samoreau‘ (2017) – in which he wrote original music and arrangements inspired by the music of the legendary Belgian born Manouche guitarist-composer Django Reinhardt. His latest album ‘Szolnok’ which in music tells the remarkable true story of his grandfather’s Hungarian violin generated a further sponsorship from BNP Paribas in Central Europe in late 2018, and was released on May 3rd, 2019. Weltlinger has further ongoing sponsorships with the Danish microphone manufacturer DPA microphones, US string instrument manufacturer Saga instruments as well as the Scottish acoustic amplification and electric violin manufacturer  Skyinbow acoustic pickups, and is a co-composer with Australian producer-composer Bruce Maginnis for the international production music library houses Audio Network, Fable, Cavendish Music, The Funky Junkies, Intervox and Focus Music.