In 2010 Daniel Weltlinger was specifically commissioned to record a Django Reinhardt tribute album at the request of former chief executive of BNP Paribas in Australia Didier Mahout, himself a huge fan of the music of Django Reinhardt and jazz music. In keeping with the French bank’s philosophy of philanthropy and support of the fine arts, and together with the help of fellow BNP staff members Dominique Curien and Julia Boyce, they arranged the entire financing of this seminal recording project. Realising that the overwhelming majority of recordings dedicated to Gypsy-jazz music did not make enough of a focus on Django Reinhardt as a great composer, Weltlinger decided to make this album exclusively centred around Django’s unique, quirky and darkly beautiful compositions. As well as the more well-known of Django’s compositions such as “Minor Swing” and “Nuages” are compositions that rarely see the light of day such as “Nympheas” and “Tell Mozart” that are given a new breath of life, serving as a gentle reminder of Django’s genius not only as one of the greatest jazz guitarists of all time but also one of the truly great jazz composers and innovators of his era. 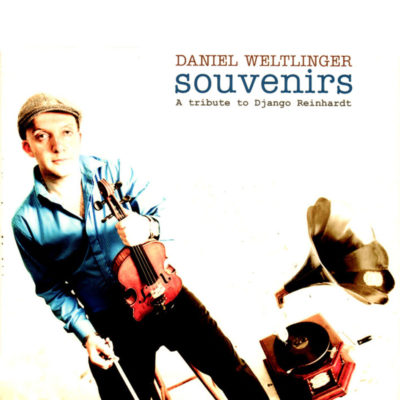 ‘Sydney based violinist Daniel Weltlinger has played with numerous Australian world music acts, and is a key member of German-Gypsy guitarist Lulo Reinhardt’s excellent band. It’s no surprise, then, that his own debut album is a tribute to the compositions of Lulo’s famous great-uncle, the great Gypsy guitarist Django Reinhardt. Weltlinger admirably recreates the sweet nostalgic mood of the 1930s/‘40s “hot” jazz style, while thanks to input from some swinging sidemen, classics like Nuages and Djangology are born anew. Flawless playing.’