‘A CD in the Yiddish language, another one in German. Some songs are recorded on both, and thus in both languages. Many of the songs appear on one or the other record. I have always wanted to publish them for posterity in my way, and this year I finally succeeded! Since 1988 I have performed most of them on stage with Götz Lindenberg. With Daniel’s violin, I knew that I had now found the “missing link”. It should have sounded like this all through the years. Although we grew up so far apart – in Sydney and Berlin – we play and sing as though we had grown up together! It is the old European culture that unites us: the longing and loss felt in Jewish families who had escaped to Australia joins with shock and loss in my own family in Berlin. World War Two is still very present, the Shoah determines our thinking… no! Our feeling! We both look for lost treasures and new thoughts. We found them in old Yiddish folk songs, in many songs by Georg Kreisler, in the beautiful Hebrew songs from Israel’s pioneer days and in the simple love songs in both languages.’ 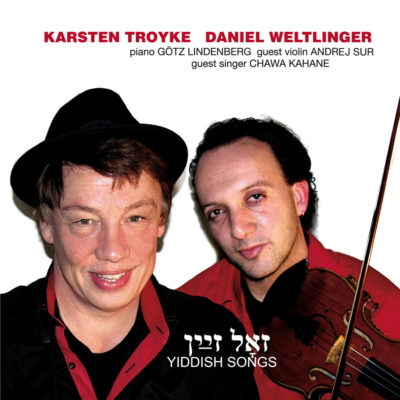